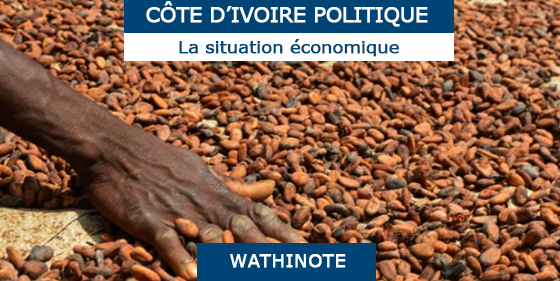 Growth remained strong at 7.3 percent in 2019, supported by private investment and services. In 2020, the economy will be impacted by effects of the COVID-19 pandemic, driven primarily by domestic containment measures that will impact supply and demand, as well as spillovers from global demand slowing down. 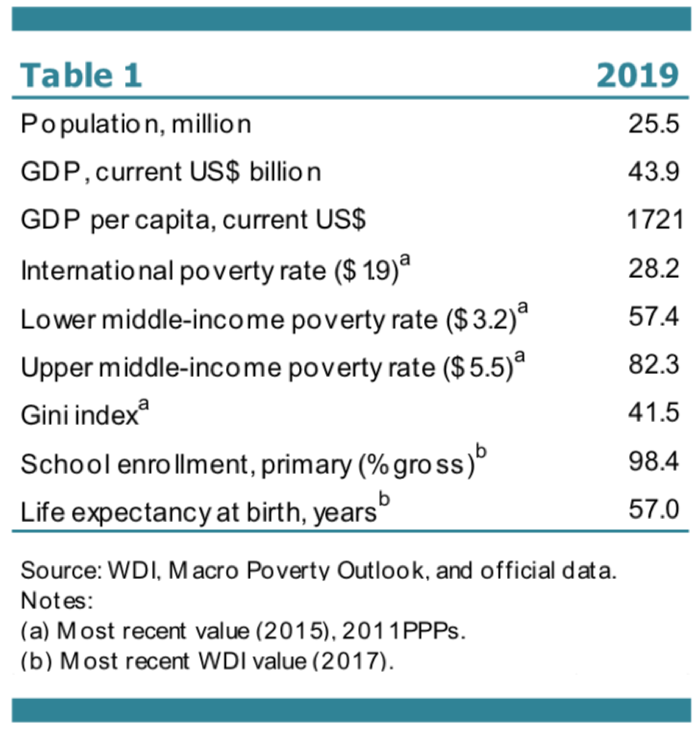 Inflation increased marginally but remained subdued at 0.8 percent, well below the WAEMU regional target of 3 percent, reflecting lower energy prices and moderate food inflation. The fiscal deficit declined from 4.0 per- cent of GDP in 2018 to 3.0 percent in 2019 in line with the WAEMU target of 3.0 percent of GDP.

The government policy to limit recruitment in the public sector (except education and health) helped lower the wage bill while the under-execution of foreign-financed projects reduced capital expenditure. Côte d’Ivoire’s monetary and exchange rate policies are managed by the Central Bank of West African States (BCEAO), which maintains a fixed peg between the CFA Franc and the Euro.

The real effective exchange rate (REER) de- preciated by 5 percent in 2019, due to the Euro nominal depreciation against the US dollar combined with persistently lower inflation of the WAEMU compared with trading partners. 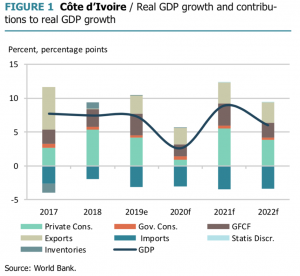 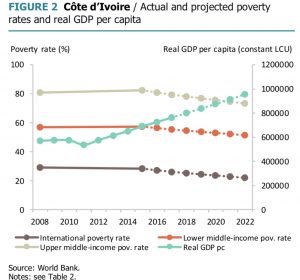 Measures restricting social activities and interactions are likely to affect domestic demand (closure of bars, shops, restrictions on transport) and investment. On the demand side, though the contribution is declining, private consumption and investment will continue to sup- port economic activity. The increase of farmgate cocoa prices is favorable to poor cocoa farmers. Finally, rising election-related fiscal pressures will challenge Cote d’Ivoire’s ability to sustain robust and inclusive growth while maintaining the pace of fiscal consolidation.

The medium-term economic outlook remains uncertain due to the COVID-19 pandemic. The severe global slowdown coupled with the negative impact of domestic containment measures will affect Cote d’Ivoire’s performance. Measures restricting social activities and interactions are likely to affect domestic demand (closure of bars, shops, restrictions on transport) and investment may also be affected by these restrictions and a domestic outbreak. In addition, global slowing demand may affect exports so overall growth is projected to drop to 2.6 percent in 2020.

Key sectors driving growth will include services (telecommunications and transportation), manufacturing (agro-processing) and construction. On the demand side, though the contribution is declining, private consumption and investment will continue to support economic activity. Government consumption is expected to compensate partly for weak private consumption in supporting economic activity. Inflation is likely to increase to 2.0 percent in the medium term but remain well below WAEMU’s 3 percent target.