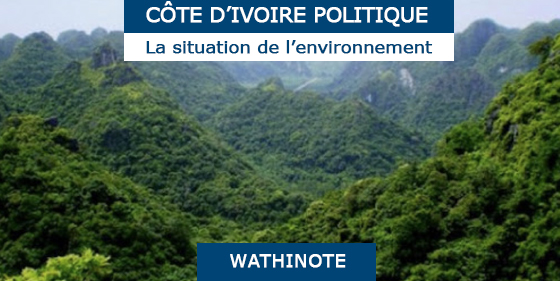 The Republic of Côte d’Ivoire is located in West Africa and shares borders with Liberia and Guinea to the west, Ghana to the east, and Mali and Burkina Faso to the north; to the south lies the Atlantic Ocean.

The United Nations Environment Programme (UNEP) has undertaken a post-conflict environmental assessment (PCEA) in a number of countries since 1999. PCEAs in general describe the existing condition of the key environmental sectors that have been impacted by conflict or may have contributed to a conflict in a given country.

Annual weather variation can be characterized by three seasons: warm and dry from November to February, hot and dry from March to April, and wet from June to October. The latitude and pattern of rainfall have given Côte d’Ivoire three ecological zones: in the north of the country a savanna zone, in the south a dense humid forest zone, and a transition zone between the two.

There are 231 classified forests (forests under government control where timber exploitation is allowed).

The national economy is considered to be fairly well diversified. The primary sector— which makes direct use of natural resources through agriculture, forestry, and fishing or hunting—comprises roughly 30 percent of the country’s GDP.The secondary sector, covering industrial and manufacturing activities that produce finished goods, comprises 21 percent of GDP.The tertiary, or service, sector represents 49 percent of the economy.

Due to record high prices and availability of fertile forest land for cacao production, Côte d’Ivoire’s economic growth surpassed any other in the region between 1960 and 1979, and it became known as the “Ivorian miracle,” with Abidjan dubbed the “Paris of West Africa.” The growth was based on export-oriented agriculture.

Historically, the Ébrié Lagoon provided the foundation for Abidjan’s social and economic development

Côte d’Ivoire’s industrial forestry sector has been well developed since the early colonial period due to extensive forest resources, good road infrastructure, and ample energy supplies. Between the 1960s and 1970s, the export of timber products was the third most important generator of export revenue after cocoa and coffee.

Historically, the Ébrié Lagoon provided the foundation for Abidjan’s social and economic development. Early settlers in the area were fishermen, and fishing remains an important livelihood in the region. Following the development of the main harbor—protected from the elements and accessible all day and throughout the year—it became the main port of entry not only for Côte d’Ivoire but also for landlocked West African countries like Burkina Faso and Mali.

This change in the status of the port had beneficial consequences for a range of industries, and soon facilities associated with the production and refinement of fuel, chemicals, and food were developed around the lagoon. In general, the change drove the development  of the then-capital city.

The conflict period of 2002–2011 had a dramatic impact on both the process of urbanization and the infrastructure of Côte d’Ivoire. The population of Abidjan is reported to have doubled between 2002 and 2006 due to large-scale migration from villages and towns.

Cities to the north of the Zone of Confidence also faced challenges. When the formal government withdrew from the north, the consequences for the population were enormous. All services in northern cities collapsed.

As Côte d’Ivoire forests have high biodiversity value with many endemic species, these forests also have global significance. Many of the classified forests were already severely degraded or no longer forested at all even before 2002.

Recommendations for the classified forests

Prior to the conflict, Côte d’Ivoire had designated a number of areas as national parks and had established a specialized agency, the Office for Parks and Reserves (OIPR). The parks existed in all parts of the country and in various ecological zones. During the conflict, however, all parks suffered impacts of varying degrees. During the assessment, three national parks were studied.

Comoé National Park has maintained the integrity of its landscape and habitat. During the crisis, the main pressure exerted on the park came from intense poaching, grazing by cattle, and late fires. Those threats have significantly abated but should be considered in abeyance rather than extinct. Although the densities of animal populations are low, the diversity of the park’s fauna has been less impacted.

If the remaining animals and their habitats can be kept safe, their populations may yet recover. Species that have totally disappeared from the park, such as the lion and African forest elephant, could be reintroduced. Elephants currently in the Rural Zone at the exterior of the park, which causes community-animal conflicts, could be led back into the park. Reintroducing lions from captive stock is theoretically feasible but technically challenging and costly. In general, the pressure on and damage to the park can be alleviated if there are adequate resources for surveillance and management.

The boundaries of Tai National Park were barely breached during the crisis and superficially, it appears the chaos that engulfed the rest of the country had little affect on the park. However, indications of illegal activity, mostly poaching, are visible everywhere. Chimpanzee and monkey populations have suffered alarming decreases in the very recent past—as much as a 65 percent fall in the number of chimpanzees in the Tai sector between just 2010 and 2011—caused by the sharp spike in poaching that occurred during the post-election crisis. It is clear from this that surveillance is of paramount importance.

Marahoué National Park presents a serious challenge. If OIPR is to regain effective management of the park, around 30,000 settlers need to be managed. The habitat and animal resources of the park have been damaged to such an extent that, if left to regenerate on its own, the park would turn into a secondary forest with poor biodiversity and undeserving of the status of national park.

Two major projects are now underway to improve wastewater collection. A project financed by the African Development Fund targets the Gourou Basin and the associated communes of Adjamé, Abobo, Cocody, Plateau, and the Bay of Cocody. The other, financed by PUIUR, targets the Abidjan communes of Abobo, Adjamé, and Treichville.

Abidjan once had a well-designed wastewater and rainwater collection system. Wastewater was collected in underground sewers that led to main collection points and thence to the treatment facility

Industrial companies are obliged by legislation to clean their wastewater before discharging it into the sewage network or into surface waters. However, only large companies, usually those that have certification (such as ISO 140019) and are supervised by the Classified Installation Inspection Service (SIIC),104 observe this regulation.

The term waste sector is used here to refer to the prevention, reuse, recycling, treatment, and disposal of residential and hazardous waste. Residential waste means waste produced by households and to assimilated industrial, commercial, and hospital waste with characteristics similar to household waste. Hazardous wastes are usually industrial and chemical, or infectious and medical wastes.

Ébrié Lagoon is the biggest lagoon system in West Africa and an important cultural and economic feature of Côte d’Ivoire.

Plastic is not biodegradable; if the lagoon is to recover, the plastic trash will need to be trawled and removed

Analysis of water quality provides a snapshot of the pollution at the time of sampling. Such analysis is therefore very unreliable in coastal waters that are influenced by tide and hence in perpetual flux. Tidal influx causes a significant disturbance of the body of water, so samples taken at different times of the day could yield very different concentrations of pollutant. Sediments, on the other hand indicate the accumulated pollution within a water body over a period of time. Thus sediment measurements taken from Ébrié Lagoon are probably more accurate and more representative of the condition of the lagoon in general than the water samples.

In the case of Ébrié, however, the decision is somewhat more straightforward. Layers of plastic waste have accumulated in many of the acutely polluted areas of the lagoon, especially those where tidal currents are slow. Plastic is not biodegradable; if the lagoon is to recover, the plastic trash will need to be trawled and removed. If such a project were initiated, it would be relatively easy to remove severely contaminated  sediments along with the plastic waste.

Côte d’Ivoire has been going through political and economic turmoil for more than two decades. The environmental consequences of that experience are broad and deep, and can be felt across the country in many sectors. The final decision on the sectors to be assessed was made based on a systematic process, which involved the following steps:

Based on the above process, the following key themes were taken up for analysis :

forests, including national parks and classified forests, that were impacted by encroachment and lack of administrative oversight;

In addition, the study also looked at how the institutions overseeing natural resource management and environmental governance were impacted by the conflict.

The Ébrié Lagoon is an economically and socially important waterbody in Côte d’Ivoire. Over the decades, however, the lagoon has become heavily polluted, primarily due to disposal of solid and liquid wastes from Abidjan. Restoring the lagoon will be an important aspect of restoring quality of life in Abidjan and was therefore the main focus of environmental sampling and analysis during the assessment.